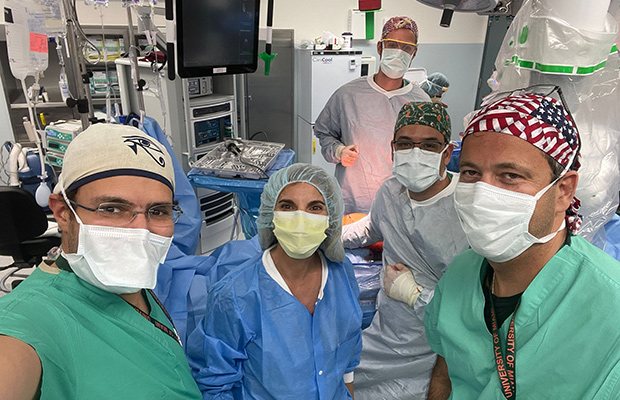 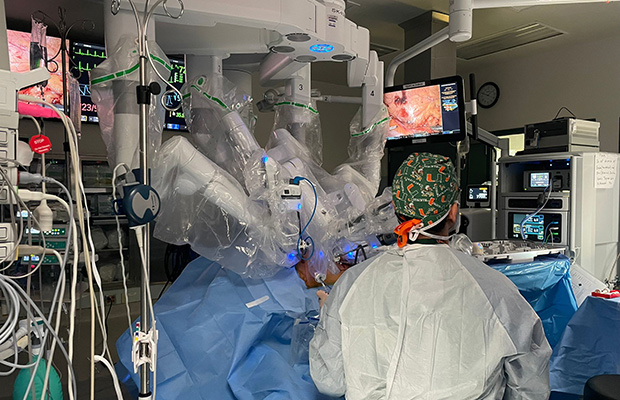 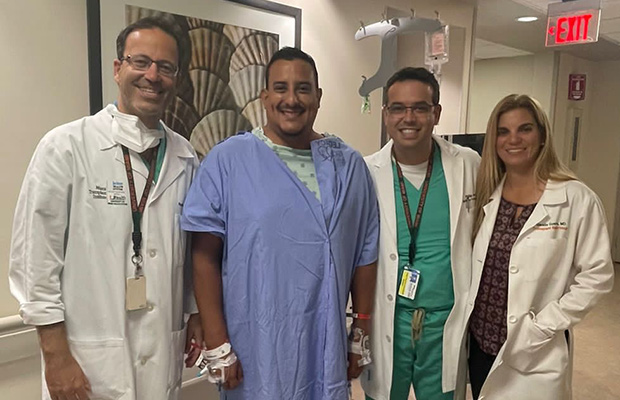 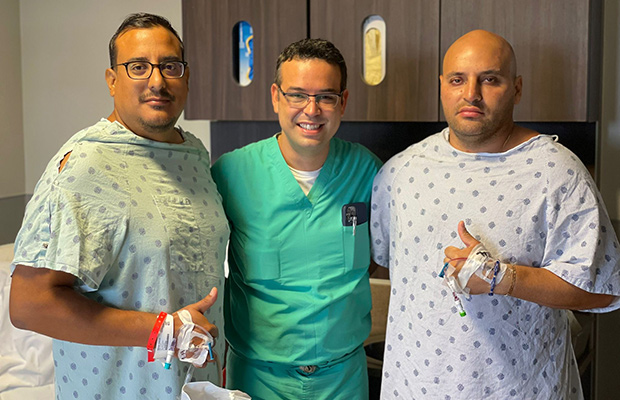 It took 12 hours for Luis Benavides, 44, to appreciate the full power of robot-assisted surgery.

The Virginia man had several health issues, and his deteriorating condition was pushing him to need dialysis in the near future. Benavides was constantly concerned that his kidneys would finally give out.

His best chance of survival was a kidney transplant.

Benavides’ cousin, Patrick Villagomez, was adamant about being his kidney donor. After thorough testing, it was determined he was a match.

However, Villagomez, 39, spent weeks weighing the life-altering decision. The answer ultimately came to him in a dream where his godmother – Benavides’ mother – spoke to him.

“She said, ‘I need your help to save my son’s life,’” Villagomez said. “Since then, I knew it was supposed to be me.”

Soon after the match was made, the two men prepared for a robotic living donor transplant at the Miami Transplant Institute (MTI), an affiliation between Jackson Health System and UHealth – University of Miami Health System, and the only transplant center in the southeastern United States where both procedures are performed robotically.

Hours after the successful surgeries took place on July 19, Benavides stood up from his hospital bed, carefully walked to his cousin’s room, and kissed him on the forehead.

“That’s a testament to the robotic surgery,” Benavides said.

The transplant marked the 99th and 100th procedures performed at MTI using the da Vinci Surgical System. It was also the first time a robot was used on both a kidney donor and recipient at the same time in the southeastern U.S.

“Their kidney functions are beautiful,” said Giselle Guerra, MD, MTI’s medical director of Transplant Services and medical director of the kidney transplant program. “From a kidney perspective, we do believe this is the future, because it’s the best thing for patients. They experience less pain, have lower risk of infection, better survival rates, and improved outcomes overall.”

Since MTI’s first robotic surgery in August of 2021, this innovative method has become the preferred option for complex surgeries. Most living donor surgeries are now done robotically at MTI, and the center is training more surgeons to use the device for a wide variety of procedures.

Rodrigo Vianna, MD, PhD, MTI’s director of Transplant Services and chief of liver, intestinal, and multivisceral transplant, admits he was skeptical of robotic surgery at first.

“I thought it was a marketing gimmick, or that surgeons were using the robot because of the novelty of it,’” said Dr. Vianna, who performed the 100th surgery. “I have completely changed my mind. Once you use the robot, you don’t want to go back into laparoscopic surgery because the patient recovers so much quicker, and they can get back to living their life that much sooner.”

During open or laparoscopic transplants, surgeons maneuver their hands and tools inside the patient, forcing them to move around other organs to reach the kidney. The robotic system has specially designed instruments that can slide around unrelated organs and conduct every cut, stitch, and connection required. The surgeon directs each move with handheld controls attached to a video display.

The result has been MTI patients returning home in record time. Nearly 95 percent of the institute’s kidney donors have been discharged within 24 hours of their surgeries, down from an average of four days with laparoscopic surgery. Most robotic kidney recipients are home within 48 hours.

Dr. Guerra said those quick discharges are only part of the story. Every metric they use to gauge the success of a surgery has improved when performed robotically, including a decrease in the use of pain medication.

“We had one patient who didn’t even take a Tylenol after surgery,” she continued.

A month after his kidney transplant, Benavides already started to experience the quality of life he knew prior to his health challenges. Villagomez is back to enjoying time with his family and the normalcy he had before giving the gift of life. He feels a tremendous sense of relief knowing he was able to help his cousin.

“It is the greatest achievement that I’ve made in this world, being able to save another life, with my own organ, my own flesh,” Villagomez said.